“It’s unbelievable. We feel like flying, we are so happy. I nearly broke into song inside [the Constitutional Court], breaking the law…” These were the words of 77-year-old Eunice Dhladhla, a domestic workers’ union organiser, after the court ended years of unfair exclusion and discrimination against domestic workers.

Twenty-six years into democracy, and still domestic workers could not claim compensation for contracting a disease, being injured or disabled, or even dying while at work. The Compensation for Occupational Injuries and Disease Act expressly excluded domestic workers from the class of workers who could benefit from and enjoy its protection.

Writing for the majority, acting Justice Margaret Victor confirmed the Pretoria high court’s earlier decision declaring Section 1(9) of the act invalid. Victor said the order would have immediate effect and apply retrospectively, with effect from 27 April 1994. This, she reasoned, was just and equitable.

Outside the court, Pinky Mashiane, president of the United Domestic Workers of South Africa, welcomed the ruling. “I felt victorious from the time we were told that [the act] was unconstitutional in the Pretoria high court,” said Mashiane.

For Thulani Nkosi, a senior attorney at the Socio-Economic Rights Institute (Seri) who led the case, the ruling is a massive milestone for domestic workers in South Africa. “The judgment constitutes a major advancement in the rights of domestic workers. We are particularly happy about the fact that the order of this court is going to apply retrospectively,” he said.

“Generally, what tends to happen in law is … what’s called the prospective effect, which means [court orders] apply from the date on which the court makes its declaration. But in this particular instance, the court says we made the declaration today, but the effect and application of the declaration are going backwards.”

The family of deceased domestic worker Maria Mahlangu will now be able to make a claim from the Compensation Fund, said Nkosi.

On 31 March 2012, Mahlangu’s body was found floating in the pool of her employer, for whom she had worked for 22 years, in Pretoria. Her family remains in the dark about the circumstances and facts that led to the matriarch drowning at her place of employment.

After Mahlangu was laid to rest, her daughter Sylvia Mahlangu approached the Department of Employment and Labour to enquire about compensation. She was informed that she could not claim as the act expressly excluded domestic workers from the definition of an employee.

With help from the South African Domestic Service and Allied Workers Union, Sylvia Mahlangu approached the Wits Law Clinic and, later, Seri, which represented her in her challenge of the constitutionality of certain sections of the act.

During the proceedings, the labour department conceded that the section was invalid and opted to amend it. This then saw the Pretoria high court declare the section unconstitutional on 23 May 2019. Because of a dispute over whether the declaration must apply retrospectively or prospectively, the court declared on 17 October 2019 that the order would apply retrospectively with immediate effect. It is this high court order that the Constitutional Court was called on to confirm.

Sylvia Mahlangu said she was excited at the outcome of the judgment.

The continued exclusion of domestic workers from the act trapped women and their dependents in a cycle of gendered and racialised poverty. Unless there is recognition and articulation of intersectional discrimination, the enormous burden carried by domestic workers will not be sufficiently acknowledged. Domestic workers, according to the Constitutional Court, “experience racism, sexism, gender inequality and class stratification”.

The recognition of the intersecting axes with which domestic workers have to deal was a notable moment for Kelebogile Aplane, a researcher at Seri. It affirmed the lived reality of domestic workers, said Aplane, and the judgment would have a huge impact on their lives.

Victor also said that “domestic workers are the unsung heroines in this country and globally … Their salaries often are too low to maintain a decent living standard … domestic work as a profession is undervalued and unrecognised, even though they play a central role in our society.”

Domestic workers are among the lowest-paid workers in South Africa. Many are paid less than the national minimum wage of R20 an hour and their employers do not register them with the Unemployment Insurance Fund.

“This was not only about Maria Mahlangu, but all domestic workers who died and got injured in the line of duty,” said Mashiane.

She called on all domestic workers to join unions to reap the benefits of the judgment. She also called on the public to assist union officials to identify people who might be affected by the court’s ruling.

“I want to call on one family, the Christina Moyo family, somewhere in Alexandra. Christina Moyo died while looking after the employer’s house. She was raped and killed in front of her four-year-old daughter. [We] really need contact details for the Moyo family,”  pleaded Mashiane.

The labour department was ordered to pay the applicants’ legal costs.

By: Musawenkosi Cabe  This article was first published by New Frame. 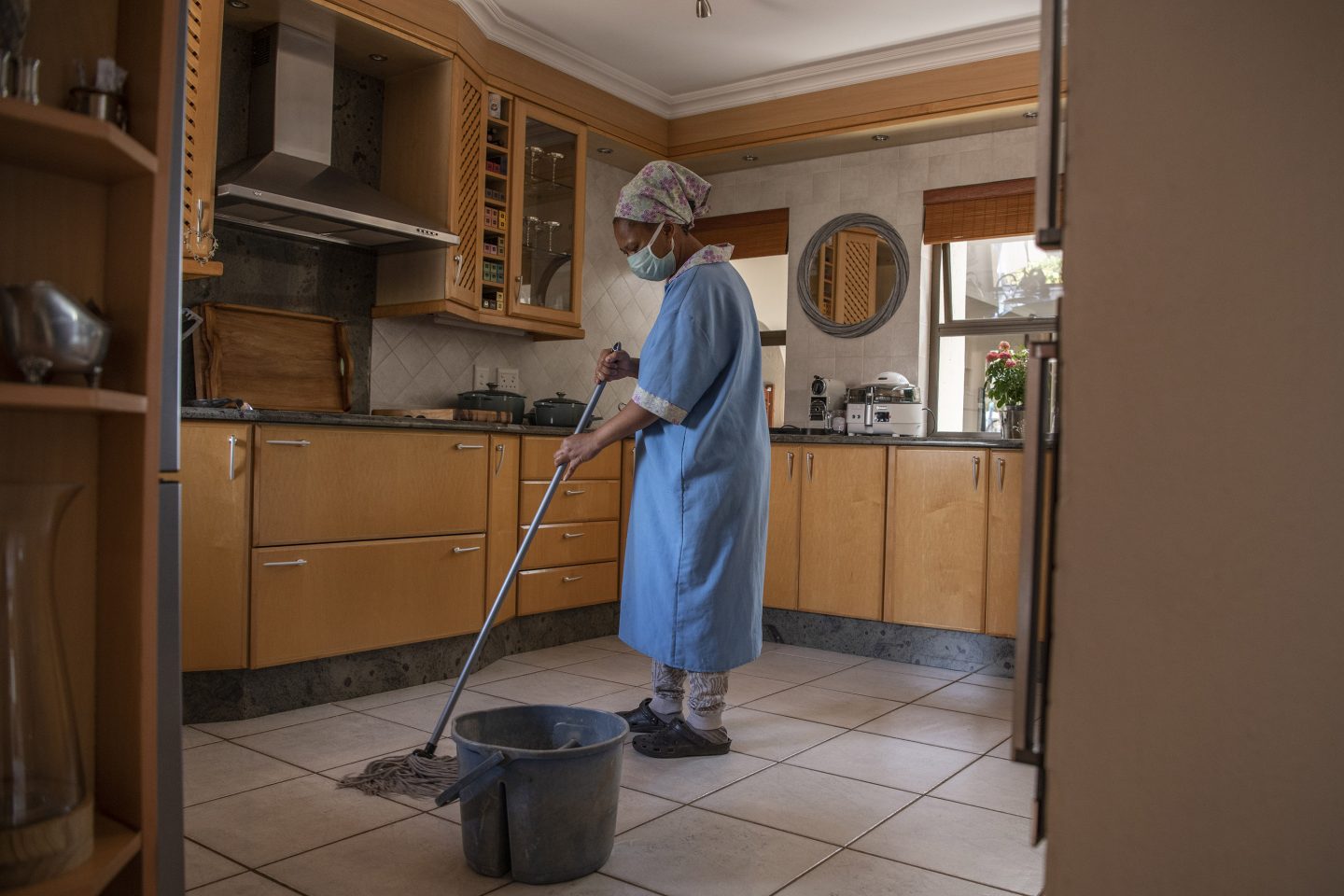